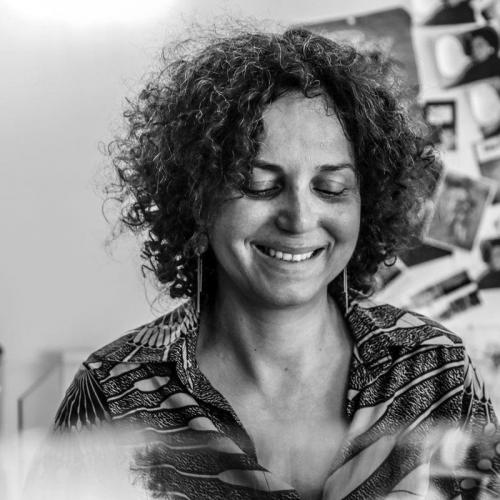 Gia Abrassart is an independent journalist and activist of decolonial culture. Her master's degree in journalism focused on the invisibility of the African diasporas in the French-speaking media in Belgium (Université Libre de Bruxelles, ULB, 2010). In 2018, she opened Café Congo, a cultural Third Place at Studio CityGate (a post-industrial wasteland of 22 000 m2) dedicated to resistance, solidarity and multidisciplinary artistic creations. A third place for communities from African diasporas in Belgium and feminist & LGTB/Queer communities. It is therefore a circulation of artists, both racialized and queer, that vitalizes this spot.

In 2012, she co-founded the Warrior Poets collective in tribute to the masterful work of the African-American Poet Audre Lorde and co-directed, with Sarah Demart, the collective work 'Créer en postcolonie 2010- 2015. Voix et dissidences belge-congolaises' (Ed. Africalia/BOZAR, 2016). Her blog www.cafecongo.be also invites the public to rethink the Belgian-Congolese relations through artistic thought. Besides, Gia Abrassart is today also a member of the anti-racist women's committee BAMKO-CRAN. As an afro-entrepreneur, Gia has launched her label Ginger G, a fresh homemade ginger elixir infused with lemon, spices & love which allows her to run the Café Congo's project to be autonomous.

She is co-editor with the journalist Heleen de Beuckelaere of the collective book Being Imposed Upon. Being Imposed Upon is a timeless love letter and manual from and for black women. This book is a collection of reflections on being a woman and being black in Belgium. In the two national languages Dutch and French we, black women (17 authors), unite non-fiction essays, literary reflections, poetry, activist and academic texts around our quest for freedom. This book is a tribute to our elders, our heroines and our sisters.